We recently worked with the learning team at The Tower of London to pilot our new session for Secondary Special Schools.The story explores the true story of Colonel Blood who attempted to steal the crown jewels in 1671.

Curious World of the Court

In 2013, we created a new participatory performance with the education team at HRP for KS2 which was a very successful part of the schools programme for 3 years.

The session begins out of role in the education rooms. The children learn that the story is to be set in the court of King George II and Queen Caroline (in 1722) and that soon they will be going up to the Georgian State rooms in role as courtiers new to Court. They learn about Queen Caroline’s collection of curiosities and are able to interact with an 8 metre sensory cloth depicting eight curiosities that may have been in her cabinet (volcanic rock, a mermaids tail, a double ended key etc).

In role, they meet Lord Garvo and are taken up to the state rooms. Here they learn first hand how courtiers have to behave and the pressures of the court environment. The children take part in an art activity where they create their own curiosity. Soon after, they meet Lady Sophie, another new courtier, who has got herself into a bit of a pickle, which they were are able to help her with.  Finally they meet Queen Caroline herself and are able to present the curiosities they have created as gifts for her birthday. 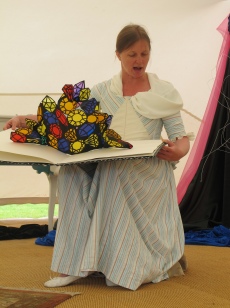 A locked door
I have the key”

We follow Jack, a 12 year old boy, who works on a farm in Brixham, Torbay as he journeys to London to make his fortune. Along the way he encounters Prince William of Orange’s quest to be King and manages to get taken on by the Prince men as a stable hand. The audience follow him on this adventure and join in with creating the sea arrival of the Prince and the march to London. They have a chance to take on the role of Jack in exploring a dilemma involving one of the Princes Cavalrymen.

This was a 30 minute interactive storytelling session devised for families in the holidays. It was aimed at children 5-12 and took place in the Queens state rooms and was set during the Glorious Revolution of 1688.

Written and Performed by Alison. Creative consulting by Emily